The Oyo State Governor, Engineer Seyi Makinde, on Tuesday, reiterated the commitment of his administration to sports development, declaring that the government will provide an enabling environment for sporting activities to thrive in the state.

The Governor, who spoke through the Secretary to the State Government, Mrs. Olubamiwo Adeosun, said that his administration would ensure the success of the World Featherweight boxing fight scheduled to be held in Ibadan on December 27, 2020.

A statement by the Chief Press Secretary to the Governor, Mr. Taiwo Adisa, indicated that the Governor stated these while receiving members of the Local Organizing Committee (LOC) of the World Boxing Federation (WBF) title fight, at the Executive Council Chamber, Secretariat, Agodi, Ibadan. He assured the LOC of the necessary support of the government for the success of the Nigerian boxer, Ridwan Oyekola during the championship bout.

“The present administration is quite committed to the development of Sports in the state and it is a pleasure that we have received this belt today. I have always seen title fights on T.V,” Adeosun, who represented the governor, said.

She added: “His Excellency would have loved to be here today because he is a lover of Sports. So, on behalf of His Excellency, the Executive Governor of Oyo state, I welcome you here.

“It is interesting that it has been 57 years, since 1963, that this competition came to Oyo State. So, like you already said, it is not by coincidence that it is in the time of our governor that this is happening again.”

According to the Governor, when the government came on board, it made its priorities clear and sports development has always been paramount on the agenda of the government. He added that this development accounted for the massive support the state has been giving its football clubs and the ongoing remodelling of the Lekan Salami Sports Complex, Adamasingba, Ibadan, among others.

“So, in addition to talking about what we have done in health, education, security and expanding the economy, there are different pillars we can use to expand it.“So, with competition like this, we already know, it will bring people into Oyo State. We have secured the state too.

“Let people know that they can come and enjoy themselves this festive period to come and watch the boxing competition. We are ready for them. And, like you rightly know, he (the boxer) will definitely have the state’s support.

“No pressures, but this belt that has come to the state today, we don’t expect it to go. You are going to study those videos on the Argentine that you are going to be fighting, and make sure you are on top of your game and look forward to the best, I wish you the very best of luck.

“To the LOC, thank you for all the good work you have done for bringing us up to this point, and even for the promoters, we appreciate you. Thank you for choosing Oyo State. You know that we are the Pacesetter State and we have a lot of good things happening in our state now.

Also Read  Oyo state has employed over 6,000 in the past year - Oyo Govt

“So, you have chosen the right time to come here and we look forward to hosting a lot more tournaments, competitions and things like this in our state.

“Our doors remain open to support you in any way we can to make this work. We look forward to actually watching the game and supporting you.”

Earlier, the chairman, Local Organising Committee of the World Boxing Federation (WBF) of the title fight, Veteran Olawale Okunniyi, said that the World Featherweight Championship bout between a Nigerian -Ridwan Oyekola, aka Scorpion and an Argentile – Lucas Matias Montesino, will hold in Ibadan on the 27th December.

Okuniyi noted that the last time Ibadan hosted such a bout was on Aug 10, 1963 at Liberty Stadium, declaring that another bout was going to be held 57 years after. He said that hosting such a global event in Ibadan under Governor Makinde, whom he described as a Sports’ lover, is the best thing to happen during his (governor’s) tenure.

According to the LOC chairman, the state has a lot to gain in hosting this event, because it will place the state on the centre stage of attraction, apart from the economic benefits the state would derive from the bout. In his remarks, the co-chairman of the LOC, Dr. Rafiu Ladipo said: “The significance of this match is that if such a thing happened 57 years ago and we are going to have it here again; I think the governor, government and the people of Oyo state should be happy.

“The whole world will be focusing on Ibadan, Oyo State during and after the fight, there is going to be a lot of financial benefits for the state, because people will come from far and near across the world for the bou”

“I believe this is a fight that we must all support and I want to plead for the support of the state government and all the people of Oyo State so that our son – Scorpion, can win the title belt,” Ladipo stated. 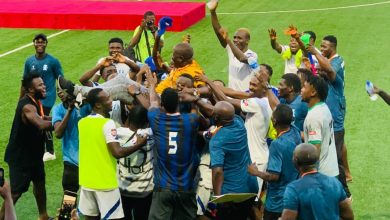