He gave the hint while fielding questions from Aanuoluwapo Omorinde on BOTTOM LINE- a political programme on IBR 92.5fm Ibadan today, the former Chairman, Oyo House of Assembly Committee on Information and Security Matters said Governor Makinde is now left with a crowd without political relevance adding that the real people are no longer with him.

“How can someone claim he has no political father? Can you become anything without a mentor? He has lost the good will that brought him to power. He is losing heavyweights daily and that is a pointer to something.

“People are leaving the PDP and they are coming into the APC on daily basis. His Deputy is coming to join us very soon, I can confirm that to you, you will see it”.

His words, “I am not aware the Deputy Governor who is one of our leaders wants to leave the party. If it is true, we can only wish him well”

“I laugh when people say these things. Some people who are not informed talk of imposition. They don’t know what they are saying. We are the ruling party and we want to win elections that is why we adopted consensus.

“I give you an instance, in Ogbomoso North local government area, there are about 17 Aspirants. Primary is like a war, do you now expect us to allow all of them to go into primary? That was why we adopted consensus and the governor never imposed anyone on the Elders or anybody”.

He also announced that the Governor has instructed that Oloye Jumoke Akinjide be adopted as the statutory delegate from Ona-Ara local government at the upcoming National Convention. 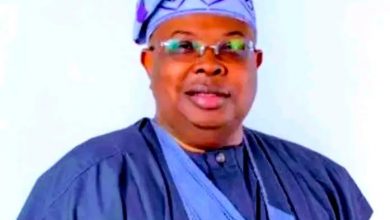