Alfa Tiamiyu Abass, a suspected murderer of a 25-year-old woman whose body parts were discovered dismembered in his house, was paraded by the Oyo State Police Command on Tuesday.

The head, two big toes, hands, and thigh flesh were among the body pieces retrieved.

The suspect admitted to killing the deceased, who happened to be his client, according to AIG Ngozi Onadeko, the Oyo State Commissioner of Police.

The dismembered victim was an hairdresser, identified only as Barakat, in Oyetoro community, in the Oyo West local government area of the state.

Residents in the area said they had been suspecting Abass’ suspicious activities, after he moved into the community about two years ago.

Residents in the community report that on Sunday, May 15, members of the community noticed an awful odor, which they traced to the suspect’s home, where the mangled remains of Barakat were later discovered.

Alfa Tiamiyu admitted to killing the hairstylist after he was apprehended, according to a resident, Mr Siyanbola Akinkunmi.

“When the body was discovered, all fingers pointed toward Alfa. A community meeting was held later that evening and everyone was on the lookout for him.

“Around 11pm, the door of his apartment opened and he came out with a nylon bag. A young boy confronted him and alerted other community members. When the nylon bag was searched, substances suspected to be human brains were discovered inside”, he stated.

Residents further recounted that he fled, but was pursued and caught by residents and was taken to his room, where more human parts, including a female head, were found.

Report has it that Barakat’s body was later identified by her husband and sister.

Her husband was said to have two weeks’ earlier reported to the Amotekun Corps in the town that his wife went missing.

Another eyewitness, Hammid Oyekola, who also shared the incident on Facebook, said the suspect was in police custody.

The State Police Public Relations Officer, Adewale Osifeso, in a statement on Tuesday, while confirming the incident said, “On May 15, 2022 around 6.30pm, one Oyerinde Gbadegein reported at the Atiba Divisional Police Headquarters that around 1pm of the same day, a corpse was seen dumped by the side of a stream on Jibola Afonja Street, Oyo town.

“On receipt of the complaint, a team of detectives from the Atiba division swung into action and proceeded to the scene. It was discovered that the corpse was that of a lady of about 25 years packed in a sack bag, which was already decomposing with the head, hands, toes and flesh from the thigh cut off from the body. One Alfa Tiamiyu Abass was arrested in connection with the case.

“Upon interrogation, the said Alfa Tiamiyu Abass confessed to have killed the deceased, one Barakat, who happened to be his customer. He stated further that he and one Qudus, now at large, perpetrated the act. A search was conducted in his house and all the parts removed from the deceased’s body were recovered. However, investigation is ongoing to arrest the said Qudus for possible prosecution”, he added. 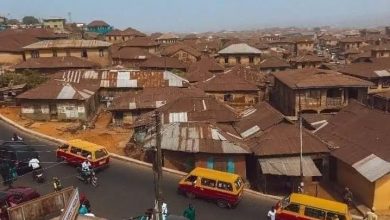 Ibadan: Man Jailed For Stealing One Pot Of Stew, Others